SciELO Collection or instance is a website generated using SciELO Methodology, including the ones which do not use SciELO in their website name.

regular or supplement
number formed by articles and texts
ahead
manuscripts that were approved by editorial board but they are not in a definitive issue. There is an ahead number by year.
review/provisional
number whose purpose is to group accepted articles which are still under review, leaving only their metadata published. There is a review number by year. Note: at the site the name adopted is provisional
pr (press release)
number whose purpose is to group the press releases texts of a number or article. There is a pr number by issue.

The sequential number is a number formed by year (YYYY), followed by a number that gives the issue’s order within a year.

This number has two purposes:

DO NOT MODIFY THIS ITEM if the issue has already been published on the website.

By convention, the sequential number is:

You can install them in the same or different folders. BUT by CONVENTION, we recommend C:\scielo\bin and c:\scielo\serial.

Examples of the same folder:

It contains the programs. E.g.: \scielo\bin

In this folder are all data, all the databases.

It contains several folders, each one for each issue of the journal. 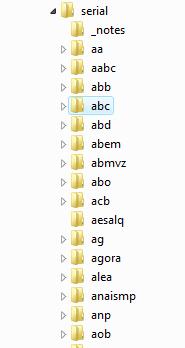 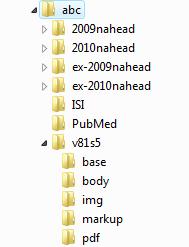 It contains folders like:
There are rules to name theses folders:

Export
Back to top